Favourite Things: sex and the city

Carrie Brashaw from sex and the city has been inspiring me. (yes, a little naughty, but oh so year 2000)

Aside from the sex scenes!! Take or leave them…the series is actually really great.

Until the movie came out, I had never seen a series and now I am hooked.

I am especially inspired by her colomn to write more about my everyday.

So hopefully you have noticed more updates on my blog.

Anyways, a book I got out of the library recently is ‘101 things to do before you’re old and boring!’ 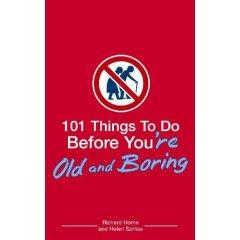 Here they ARE!!! withÂ someones comments written with them. (not mine…no I dont have a husband…)