What made the publication fabulous though, was the short story about an Indigenous Australian Artist, whose canvases have been made into the most amazing floor rugs.

Her name is Minne Pwerle, she started painting in 1999 and she died in 2006. So her 7 year painting career was short lived, but was indelible.

Minnie’s main Dreamings convey her love and frespect for the land, its ability to sustain and the ceremonies around the dreamings. 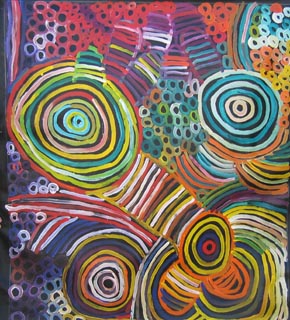 It is amazing what one woman has done in such a short space of time.