Place: On the train 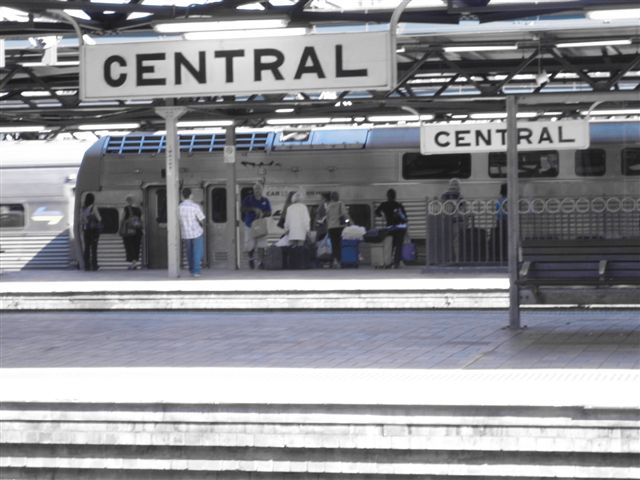 I am on a train in Sydney, travelling from paramatta to the city. Groovin with Alicia Keys challenging my thoughts and the everyday perspective I hold about people.

I am struck by a little old man wearing an apricot short sleeved shirt, his peace pervades our carriage, Part japense part maori, maybe, or is it nepalese.

Then I twist to see a chinese student with a glow slogan tshirt, hidden by an army overcoat. He seems so sad, so withdrawn, most likely so deep in thought not even aware that I am intrigued by him.

Then a guy with a red shirt (pulp fiction at that) with his lunch in a plastic bag, It looks like yoghurt, maybe cream cheese. He’s so on his way to a uni class to study graphic design or even media studies.

The business indian man who has just seated himself next to me exudes confidence in his purple, pink, blue and red striped shirt. Who was it that designed it, was it manufactured by children in china…why am I so judgemental, what made him by the shirt, did his mum, wife or girlfriend? Who is he talking to on his cell phone? He’s so not enjoying the conversation.

The old couple accross from me were quite disgusted by the backpackers carrying a large bottle of toohey’s beer in their hands. As they left the husband (or is it partner, maybe their having an affair) in their 60’s whispers sweet nothings into his wife’s ears (no they are definately married) that make her smile. The simplicity of their intimacy is so birthed in marriage.

Thats the thing about humanity…So different, yet so the same.

I believe we reflect the image of God.

Man he must be one crazy cat!!